St. Valentine's Day: The Day to Celebrate Love in all Forms

Twenty. Billion. Dollars. That’s about what St. Valentine’s Day contributed to the U.S. economy in 2018. And more than half the population participated in the Hallmark love-fest. Most of it went to jewelry and dining, but also to flowers, candy and cards. Way to go boys.

But before DeBeers diamonds, 1-800-Flowers and See’s candy, there was the real-life St. Valentine going about his merry business in the 3rd century. Little did he know that he would, some 1000 years later, be the centerpiece around whom people would pin their aching heart’s desires.

Valentine’s life is one-part truth and nine-parts legend. But if you give legend enough time, it may as well become fact.

Valentine was a 3rd century Roman physician and Christian priest. He was ultimately martyred for his faith. This much we know to be true. The rest is whatever you want to believe.

According to legend, Valentine was martyred for conducting Christian marriages when Christianity was outlawed in the Roman Empire, punishable by death under Emperor Claudius II. It was also said Claudius prohibited his Roman soldiers from marrying (believing their loyalty – and thus their effectiveness in battle – might be compromised by wives and children). Well, Valentine defiantly married them, too. He also comforted Christian outlaws in jail by sending them hearts made from parchment. But perhaps the sweetest of all stories has to do with a young blind girl Valentine befriended. After he miraculously restored her eyesight merely by the touch of his healing hand, Valentine sent her some flowers with a note of brevity: From your Valentine.

Today when we say “Valentine” we think of whatever sweetheart we’ve chosen on February 14th. Or we think of the one who we hope will choose us. This tradition of “courtly love” is believed to have originated out of France sometime in the 1300s but quickly spread to England through the mixing of French and English royal courts (during a period of romantic, chivalric ideals). Remarkably, the earliest written reference to Valentine's Day as we know it appears in Geoffrey Chaucer’s c. 1381 poem Parlement of Foules (“Parliament of Fowles”) written in Middle English:

For this was on seynt Volantynys day
Whan euery bryd cometh there to chese his make.

In other words, the day when birds chose their mates. February 14th marks the approach of the sun, warmer weather and the coupling of animals according to instinct.

Eventually, pagan influences were fused into the tradition. Cupid, the Roman god of passionate love (from Latin cupido “desire, love, passion”) – a borrowing from the Greek Eros (eran “to love”) – entered the love potion with his boyish charms and heart-shaped arrow which, when struck, would render its victim hopelessly in love. The custom of sending notes and other love-tokens is found by the 16th century but flourished in the 19th century, and then, sadly, declined to near-oblivion in the early 20th century which was, for a brief period, welcome news for men who falter with dates.

Valentine means “strong and healthy” just like love is meant to be. Not to mention it’s a #3 Destiny in numerology, one of the most optimistic, auspicious and happy numbers.

It’s not used in the English speaking world very much as a given name – though it’s still going strong among French, Italian, Portuguese, Spanish and Slavic speakers. The name is most associated with Italian-born fashion designer Valentino and the silent-screen legend aptly named “Latin Lover” Rudolf Valentino (known familiarly as Valentino).

After purchasing my first Name Stories gift for a young friend that loved it I decided to get one for my nephew. Even though he's too young too appreciate it, I'm sure Sam will love it. His Mom & Dad certainly did. Thanks again Name Stories! 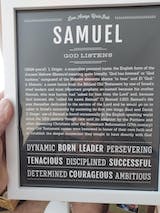 Color came out great. It is the 5th one o’ve ordered from them and they all came out beautiful. Consistent coloring used throughout. 4/5 arrived earlier than the anticipated arrival date. This last one did end up coming late, but only by a few days. Which is perfectly acceptable with the way shipping is these days.

It was exactly as shown in advertisement. Very pleased!