The most recent data available from the Social Security Department reveals that 134 baby boys born in 2017 were given the name Huck (115) or Huckleberry (19). Compare this to the 37,054 baby boys called Liam or Noah in that same year. In other words, Huck wasn’t really on my radar. Then one day, a website visitor submitted a name request asking nicely* for us to create a Name Story for her son. His name, she said, is Huck.

I should confess right away that Adventures of Huckleberry Finn is my all-time favorite book (I own a First Edition which cost me a king’s ransom) and Huck Finn is hands-down my favorite literary character. Ever. Like, ever. And I’ve pretty much read everything. Like, everything.

Even Ernest Hemingway so highly regarded this novel as to say: “All modern American literature comes from one book by Mark Twain called Huckleberry Finn...it’s the best book we've had…There has been nothing as good since."

Starting life as the son of a lower class, illiterate ne’er-do-well, young Finn is the subject of a “civilizing” attempt by the Widow Douglas at the opening of the book, when he is 13 years old. The story takes place against the backdrop of the Mississippi River, where Huck (escaping both “civilization” and his drunken father), and the runaway slave, Jim, share an endless menu of hilarious adventures.

Unlike his middle-class friend, Tom Sawyer, Huck Finn comes from the lower ranks of society (lower than the “genteel” poor). After some rigorous research, I uncovered that the word huckleberry was already in use in Twain’s time as slang term for “a person of little consequence.” I believe this is why Mark Twain, the King of Irony, used the name: Huck Finn is a person of GREAT consequence. It is the goodness of our character that matters, not the amount of our schooling or material wealth.

Over the course of the novel, with a keen logic for one so young, Huck figures out that he and Jim share a certain fate from which they are both running away. Jim is looked upon as someone’s property, and in that society therefore, helping him escape is a sin. Huck Finn, however, comes to understand the innate error of the institution of slavery. As he gets to know Jim and his story, Huck’s healthy inclination to question authority leads him to the realization of his and Jim’s common humanity.

Yes, Huckleberry Finn needs a good bath and a grueling course in grammar, but his heart and soul are exactly right. At his crisis of conscience, he makes the Christ-like decision by protecting Jim’s freedom even if it means compromising his own salvation. “All right, then, I’ll go to hell.”

Immediately upon publication in the United States (1885), Huckleberry Finn was a target of book-burnings and bans, starting with the Committee of the Library of Concord, Mass. who called it “absolutely immoral in its tone.”  Suffice it to say, I don’t want to go too deep into the subject of the book’s provocative nature other than to say I appreciate (and understand) some of its controversy.

But if I may humbly assert my opinion, I think the book’s opponents are completely missing the mark.  This book is a beacon of anti-racism by very poignantly showing, though the eyes of an honest and innocent young boy, our shared humanity.

I gave my niece a Name Stories for her two year old son. The whole family loved it. It is so well done and will be kept as a long family treasure. It was a great gift. 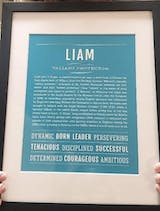 This is a beautiful birthday or shower gift for baby and parents! A gift that can be appreciated as a young person and adult!